Happy Hanukkah to all who celebrate!  In case you’re jonesing for some cookies that are holiday-appropriate but still a little out of the ordinary, I’ve concocted this recipe for Pumpkin Spice Rugelach.  I feel like fall came and went in an instant, and I’m still not ready to let go of pumpkin spice just yet.  Since these cookies are distinctly not for Christmas, I felt it was reasonable to hold off on the eggnog, gingerbread, and peppermint awhile longer and hang onto pumpkin spice for just one more bakeventure.

I adapted this recipe from the rugelach recipe in Joy of Cooking.  While the pumpkin spice was a pleasant addition, I think in the future I might try following Dorie Greenspan’s suggestions, such as working with cold fats instead of softening them and adding some other flavoring elements into the dough.  Using cold butter and cream cheese will help to make the dough puff up just like it does for pie crust and puff pastry.  I might also try an egg wash next time to give the rugelach that classic bakery sheen and make it easier for the cinnamon sugar to stick.

If you want a shortcut version (which isn’t quite going to be right, but will probably be passable), you could use store-bought pie crusts and add some extra spice and nuts to make sure it has enough oomf.  I’ll also take this moment to remind you to sprinkle the cinnamon sugar on top before you bake the cookies.  This is something I forgot to do, and mine suffered a bit from it.

I found the pumpkin butter at Trader Joe’s, and I believe you should still be able to find some there (if not, my apologies).  If not, there are some options online.  Alternatively, you can make your own or substitute thickened, canned pumpkin pie filling for a similar effect.  Just remember not to slop too much on there or it will leak out and burn, leaving you with a cookie sheet of charred sadness. 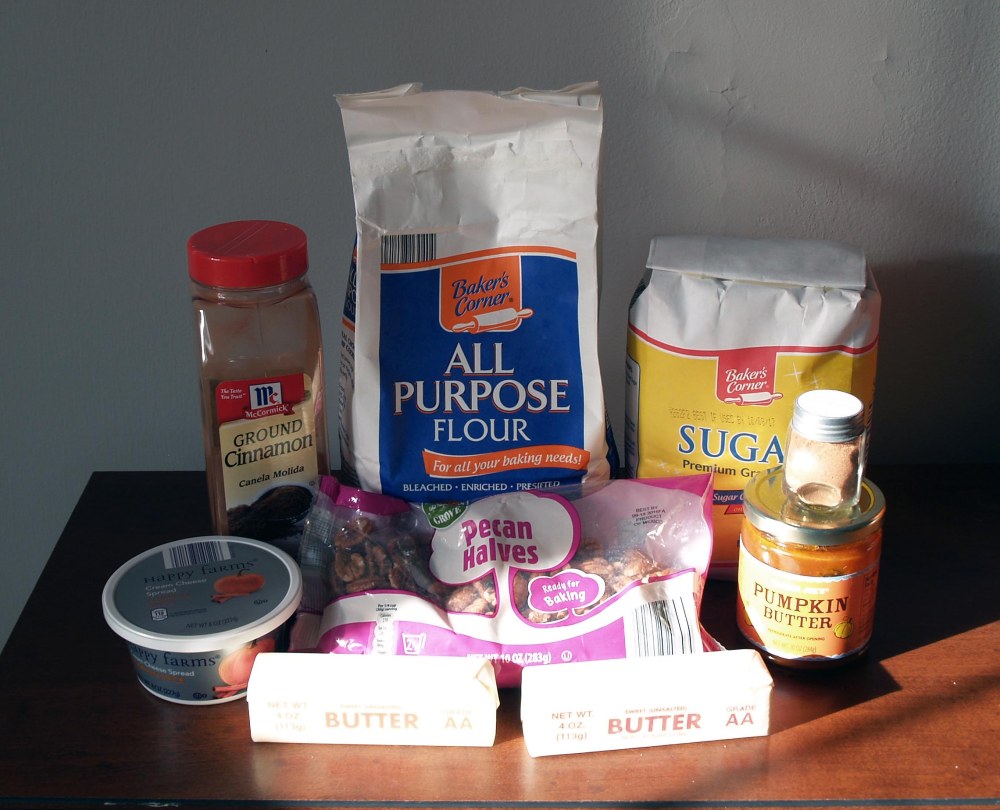 Whisk together the flour and pumpkin pie spice in a medium bowl.

Using a stand mixer or other electric mixer (or a wooden spoon), beat together the butter and cream cheese until combined.

Add in the spiced flour and beat the mixture until it just begins to form a dough (mine is probably a little overmixed in this picture). 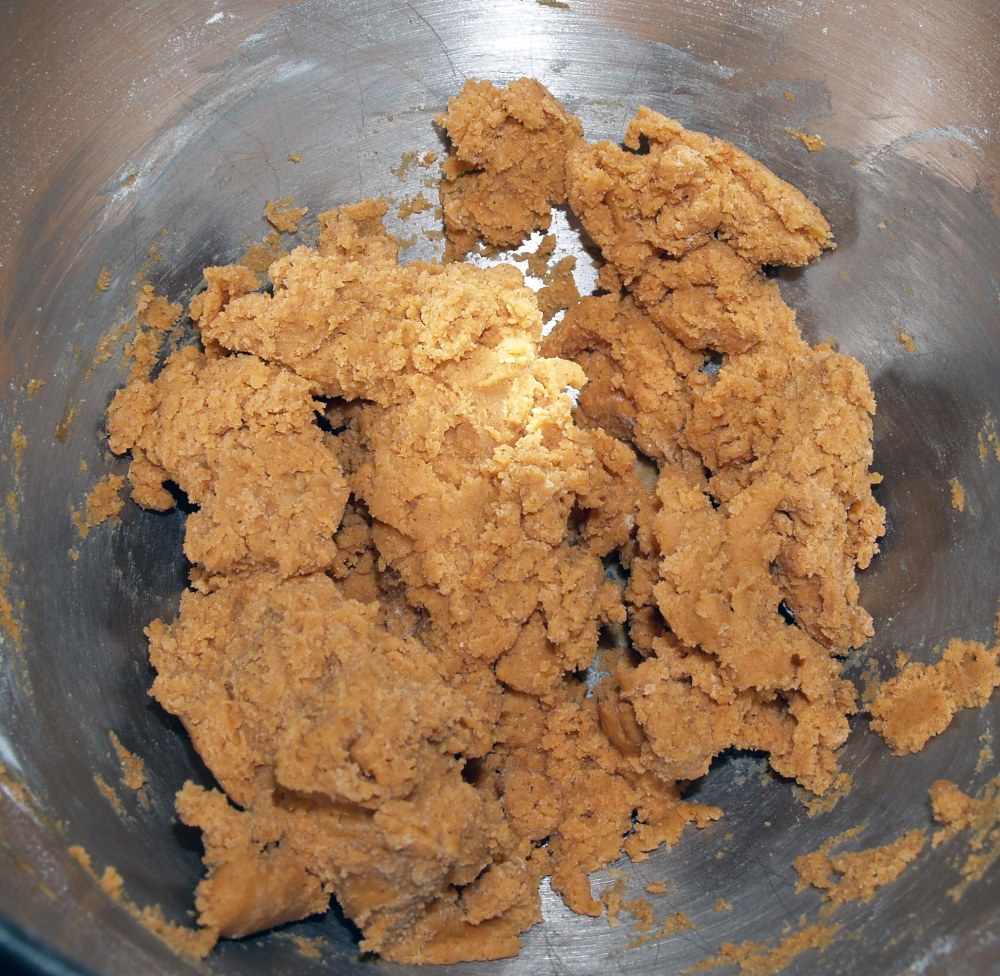 Divide the dough into three equal portions and form each into a 6″ disc.  [Note: The discerning reader will notice that I only have two discs.  That’s because I halved the recipe since I was making two other types of cookies at the same time and didn’t want to overload my cookie receptacles.]  Wrap each disc in plastic wrap and refrigerate the dough for at least an hour or up to 1 day.

In a small bowl, stir together the cinnamon and sugar until uniform.  Set this aside until you’re ready to assemble your cookies.

When your dough is nice and hard, place one disc on a lightly floured surface and roll it out into a (roughly) 14″-diameter circle. 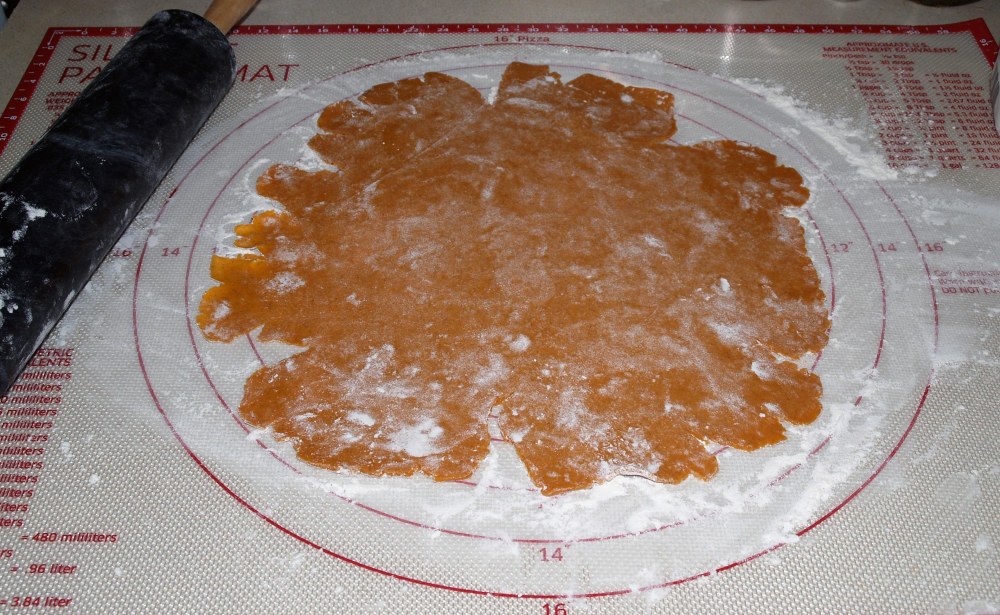 Trim off the rough outer edge and either save it to re-roll or throw it out.

Carefully spread ¼ cup of the pumpkin butter in a thin layer over the dough, leaving a ¼” border around the edge.

Using a pizza cutter, pie crust cutter, or sharp knife, cut the dough into 8 or 16 wedges (depending on how big you want your cookies to be).  I did 8 slices since I was using less dough. 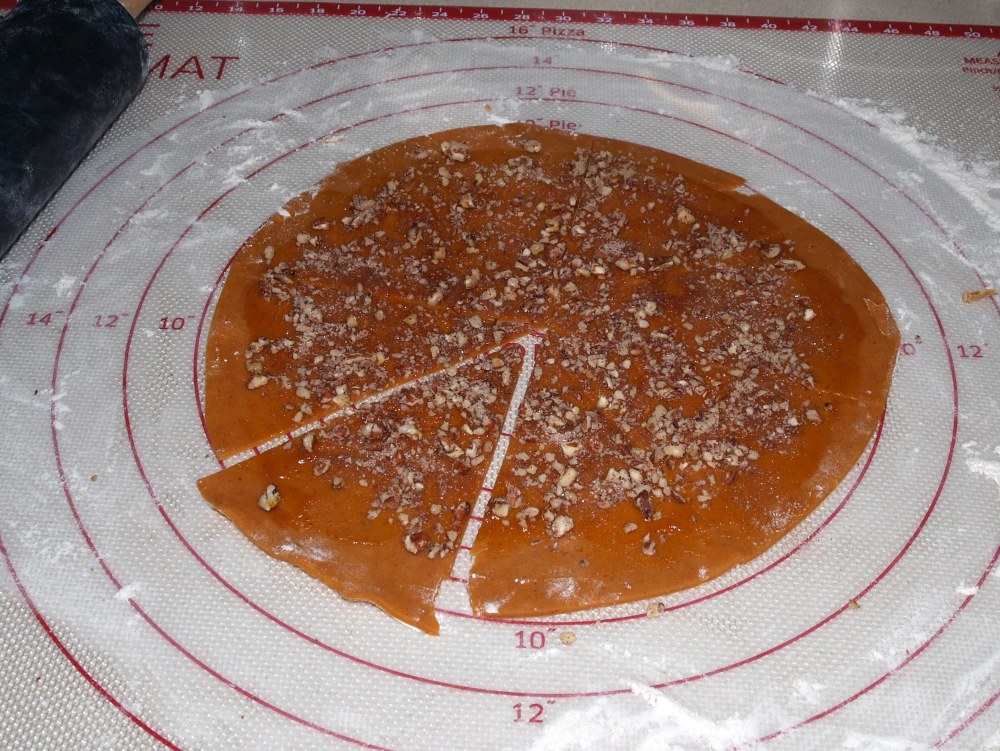 One at a time, roll each slice up, starting from the outer edge and working your way to the tip.  Transfer the cookies to a cookie sheet, tip down, and refrigerate them while you repeat the process with the remaining dough discs.

Bake the cookies for about 25 minutes, or until the bottoms just start to brown.

Leave them to cool for 5 minutes on the cookie sheets, then transfer them to cooling racks to cool completely.