Hoo boy, it’s been a busy baking weekend!  I just finished the last cupcake job, so now I finally have a little time to devote to writing about my recent creations.  I’ve spent most of my waking moments over the past 5 days thinking about cake, things to put on cake, and ways to eat cake.  Welcome to the madness!

Today’s cake recipe was the product of lots and lots of searching and thinking.  I was tasked with making (read: offered to make) a dessert for a little office celebration for yesterday, the only criteria being that it should be chocolate.  Open-ended requests can be a bit of a nightmare for me (so many options!), so I decided to stick with cake.  My extensive internet searching eventually landed me on this recipe on Sally’s Baking Addiction.  The only problem was that I don’t actually own any coffee brewing equipment.  That’s where the cinnamon kick came in; rather than go out and actually buy pre-made coffee, I decided to use chai tea instead, as suggested in Sally’s post.

From there, the rest of the recipe came fairly quickly.  Rather than go all chocolate, I decided to mix it up a bit with a Speculoos cookie butter frosting (it’s a lot easier to get your hands on now that the hype has died down a bit).  The recipe I used is a variation on Magnolia Bakery’s chocolate buttercream recipe, and it is, in a word, delicious.  The slightly-spiced cookie butter is a natural fit with the cinnamony chocolate cake.

When I was feeling more ambitious earlier in the weekend, I was thinking about doing a chocolate mirror glaze on top, but I chickened out and resorted to a ganache layer instead.  It looked nice, and tasted even better, so I’d say it worked out.  That mirror glaze is going to happen someday soon, though!  I was already making some butterfly wings with candy melts for a separate project, so I decided to write a big “Thank You” in white chocolate and add it to the cake once it had set.  The red flowers were left over from an adventure in royal icing a few months ago.  Realistically, you could leave this cake unadorned and it would be able to stand on its own, but hey, decorations are fun!  Pretty much anything you want to use is going to look great.

*original recipe by Sally’s Baking Addiction can be found here

For the ganache and decorations:

Preheat your oven to 350°F and line two 9″ round cake pans with parchment paper or grease and flour them.

In a large mixing bowl, beat together the buttermilk, oil, eggs, and vanilla.

Fold in the dry chocolate mixture until the batter is just combined, scraping the bowl as you go.  It will probably still have some lumps, but it should be mostly smooth.  It looks a lot like brownie batter at this stage. 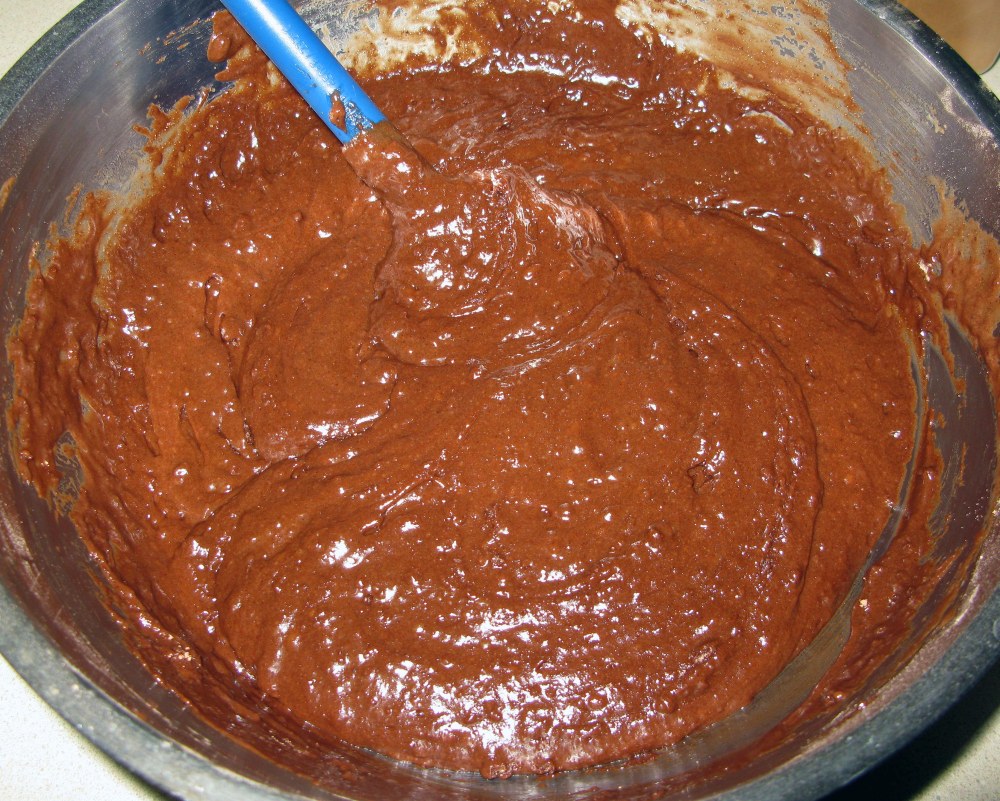 Stir in the hot tea.  Now the batter will look a whole lot thinner.

Divide the batter evenly between the two cake pans.  Drop the pans on the counter a few times to release any air bubbles, then bake the cakes for 25-30 minutes, or until a toothpick inserted in the center comes out clean.

Let the cakes cool for about 15 minutes, or until they are cool enough to handle (they’ll still be pretty hot, but not second-degree burns hot).  Run a sharp knife around the edge of the pan to release the cakes, then carefully flip them out onto cooling racks.  Let them cool completely before decorating.

While the cakes cool, prepare the frosting.  Beat the softened butter with an electric mixer until it is creamy (about 3 minutes). 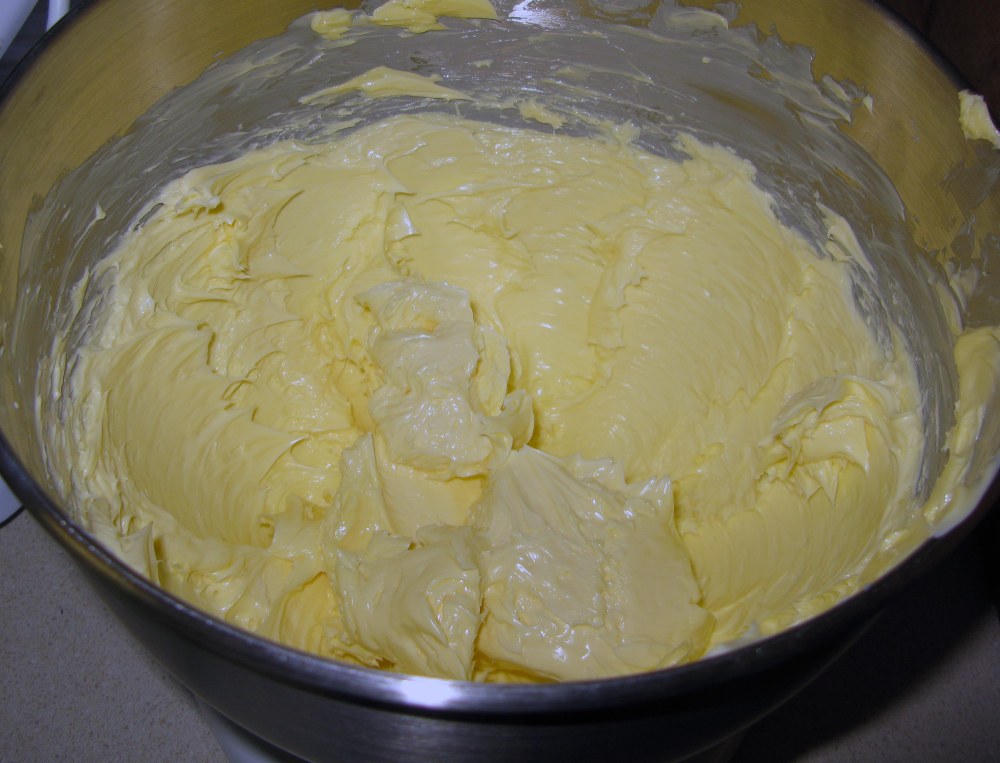 Add the milk and beat until smooth. 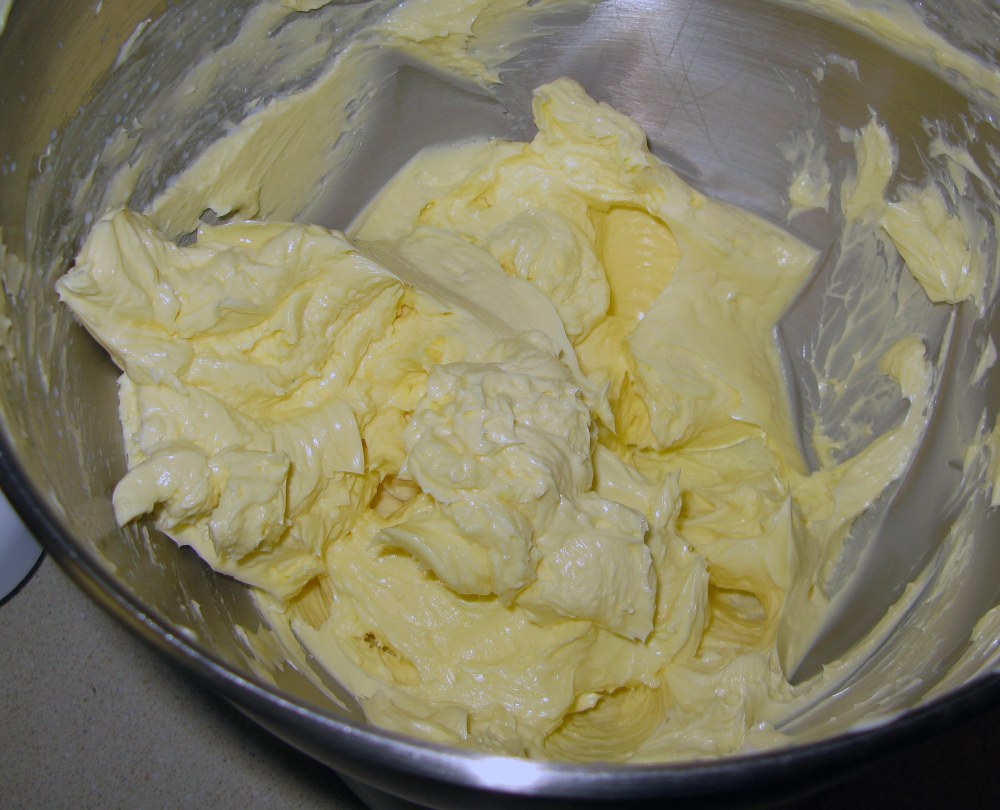 Add in the cookie butter and beat for 2 minutes more.

Add the vanilla and cinnamon and beat another 3 minutes.

Add in the powdered sugar, approximately ½ cup at a time, beating for 2 minutes after each addition.  Beat the frosting on low speed until you achieve your desired consistency (it will probably done after the final 2 minute beating session).

Hopefully by now, your cake is cool.  (If not, you can let the frosting sit at room temperature until you’re ready to use it.  Just cover it until you’re ready and then stir it a few times before use.)  Level off any domed tops with a serrated knife and place one cake on a cake board or your serving plate.  Save the unused cake tops for other purposes.

Spread a layer of frosting on top of the cake, working from the center outwards.  Place the second cake on top of the frosting layer upside down (this way you have a flat, mostly smooth surface to work with).

I often find that I have little chunks of cake missing around the edges, so this time, I used some of the leftover cake pieces to patch them in.  It worked pretty well.

Frost the rest of the cake with the remaining frosting, working to keep the top as smooth as possible.  (I’m still working on this technique.  Any tips are greatly appreciated.) 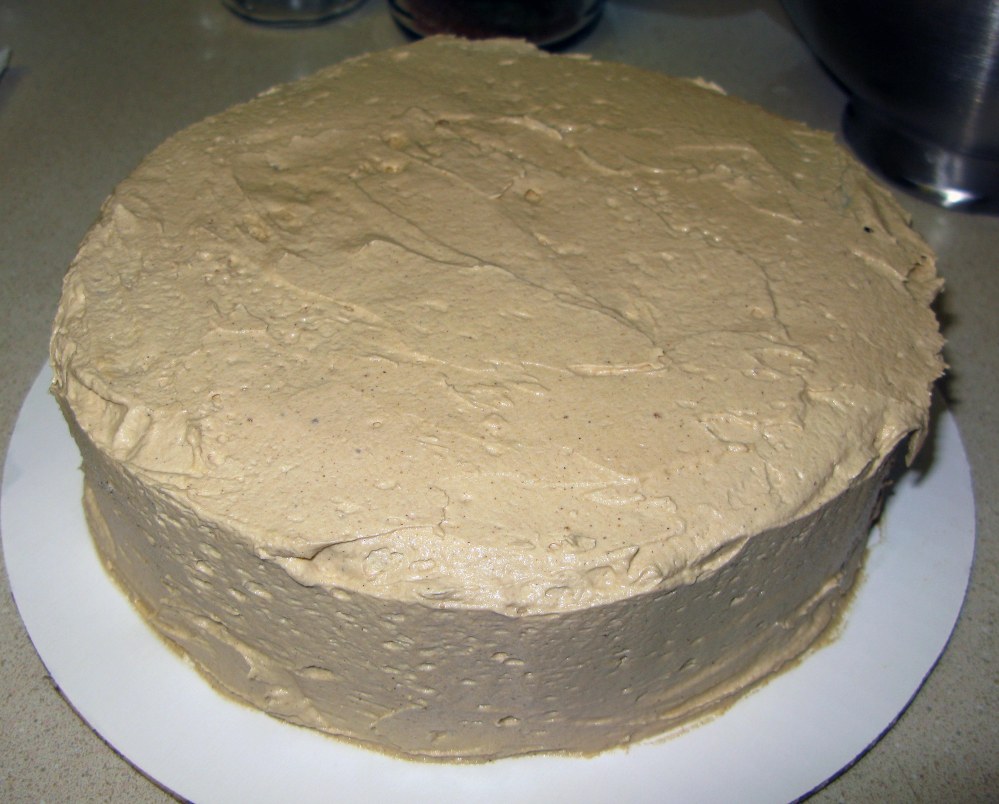 Refrigerate the cake for at least an hour so the frosting sets.  About half an hour before it’s done chilling, prepare the ganache.  Put the chocolate chips in a glass or other heat proof bowl (I use a Pyrex measuring cup).  Heat the cream in a small saucepan over medium heat until it just begins to boil.

Immediately pour the hot cream over the chocolate chips.  Let them stand for 2 minutes, then whisk the mixture until it is smooth. 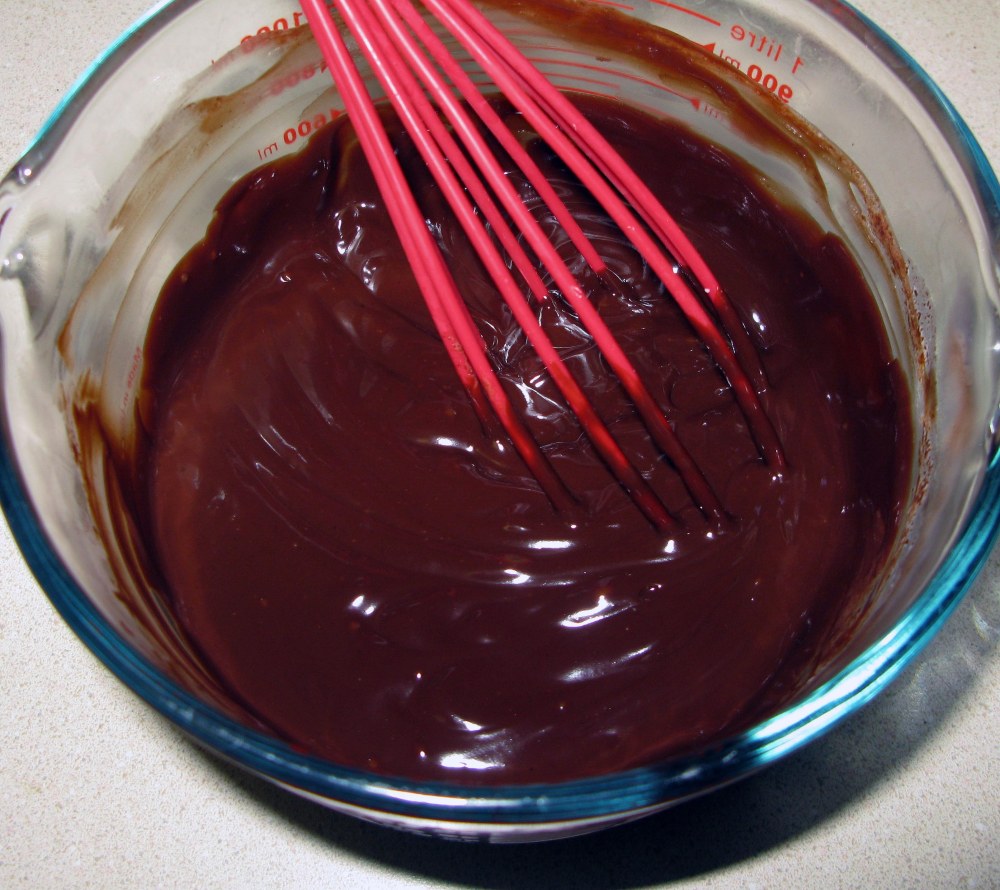 Let the ganache stand for the remainder of the cake’s chilling period , whisking occasionally.  It should thicken enough that it’s not runny, but it should still be pourable.

When the cake’s frosting is set, slowly pour the ganache onto its center, allowing it to spread and drip off the edges.  Mine was a little thick, so I had to help it along a little with a spatula.  Just do your best to keep it even.  You can use as much or as little ganache as you want.

Refrigerate the cake again for at least another half hour, but preferably overnight.  Decorate with melted candy melts, sprinkles, more buttercream, or anything else your heart desires.  Let the cake stand at room temperature for about 15 minutes before serving to make it easier to cut.