Two weeks ago, I was pleasantly surprised to see that PBS is now airing season 6 of The Great British Baking Show on Friday nights.  To celebrate, I decided to try (at least) one recipe from each episode.  This week’s experiment is Madeira cake (the first episode’s Signature Challenge).

Madeira cake is essentially a pound cake flavored with just a hint of citrus.  As Mary Berry kept hammering home during judging, the top of the cake should be domed and cracked (something you usually want to avoid while baking cakes).  This recipe contains a little baking soda, but most of the leavening comes from air bubbles created by vigorous beating of the batter.  I decided to challenge myself by using Eliza Acton’s vague nineteenth-century recipe, which is listed on the Madeira cake Wikipedia page, as a starting point.

One difference I noticed between Acton’s recipe and all the other more modern Madeira cake recipes I looked at was that hers calls for beating the eggs first, and adding the butter fourth.  I was a bit hesitant about this, as I know that a traditional pound cake usually starts with whipping the butter until it is nice and airy, then creaming it with the sugar.  Eggs are often separated so that you can beat the whites until they are full of air and then gently fold them into the batter at the end.  After a bit of thought, I decided to throw caution to the wind and try it anyway.  I am happy to report that it worked out just right.  Trust the classics, I suppose.

I did change the flavoring from the traditional orange or lemon to lime and ginger.  The flavors are there, but just barely perceptible, which is what you want in a tea cake.  If you’d like something more intense, I’d suggest doubling, or possibly even tripling the lime and ginger.  This cake goes great with candied lime peels to make up for the flavor deficit (check out this tutorial over on It’s All Frosting to learn how to make your own), but unfortunately mine were too ugly to show their faces in the photos.

I’ve left the ingredient measurements in ounces because measuring by weight is really the most accurate way to measure, and in the case of this type of cake, accuracy is everything.  That said, I did wing it when I decided that a “moderate oven” meant 350°F (after all, the large majority of baked goods tend to be baked at 350°).  My cake was done in 45 minutes, so if you really want to stick with the inspiration recipe, you can try 325°F instead.  Your cake will most likely be done in the specified hour, but be sure to check it regularly starting after 45 minutes of baking.  As always, let me know how it goes!

Preheat your oven to 350°F and line a 9″ x 5″ loaf pan with parchment paper or grease and flour it.

With an electric mixer, beat the eggs on medium-high speed until they are foamy and thick, approximately 5-7 minutes.

Reduce the mixer’s speed to low and gradually add in the powdered sugar.  Increase the speed to medium-high and beat for an additional 2 minutes. 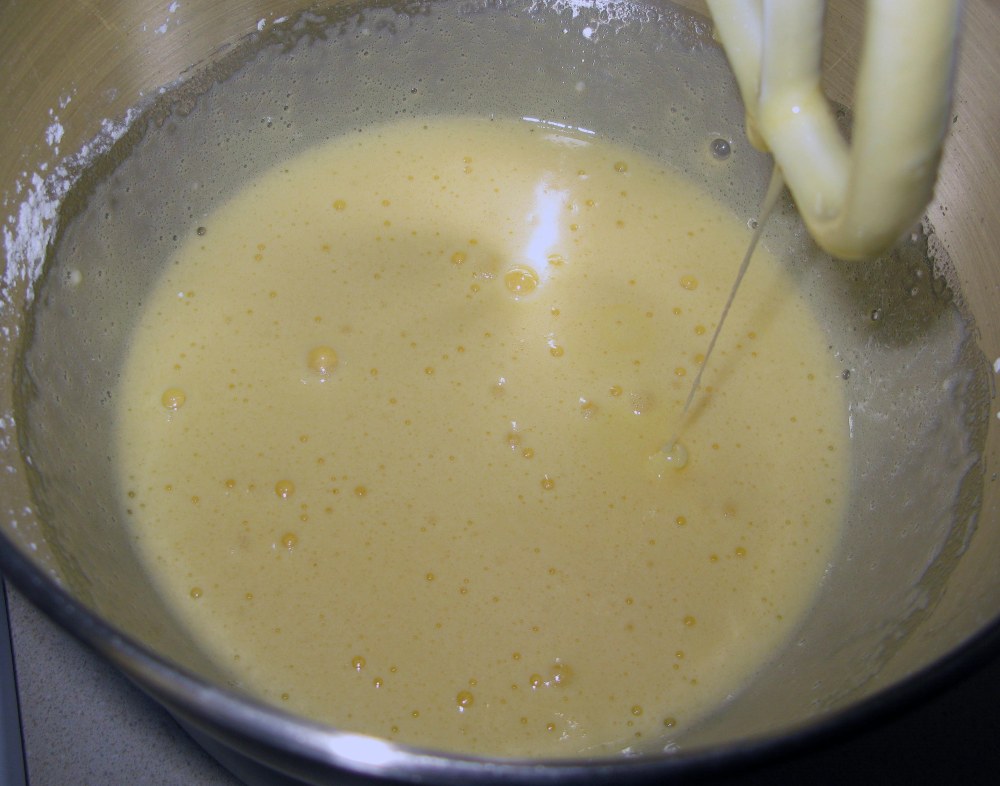 Reduce the mixer’s speed to low again, now gradually adding in the flour.  Bring the speed back up to medium-high and beat for another 2 minutes.  The batter should run smoothly in a ribbon off the beater when you lift the beater out of the bowl. 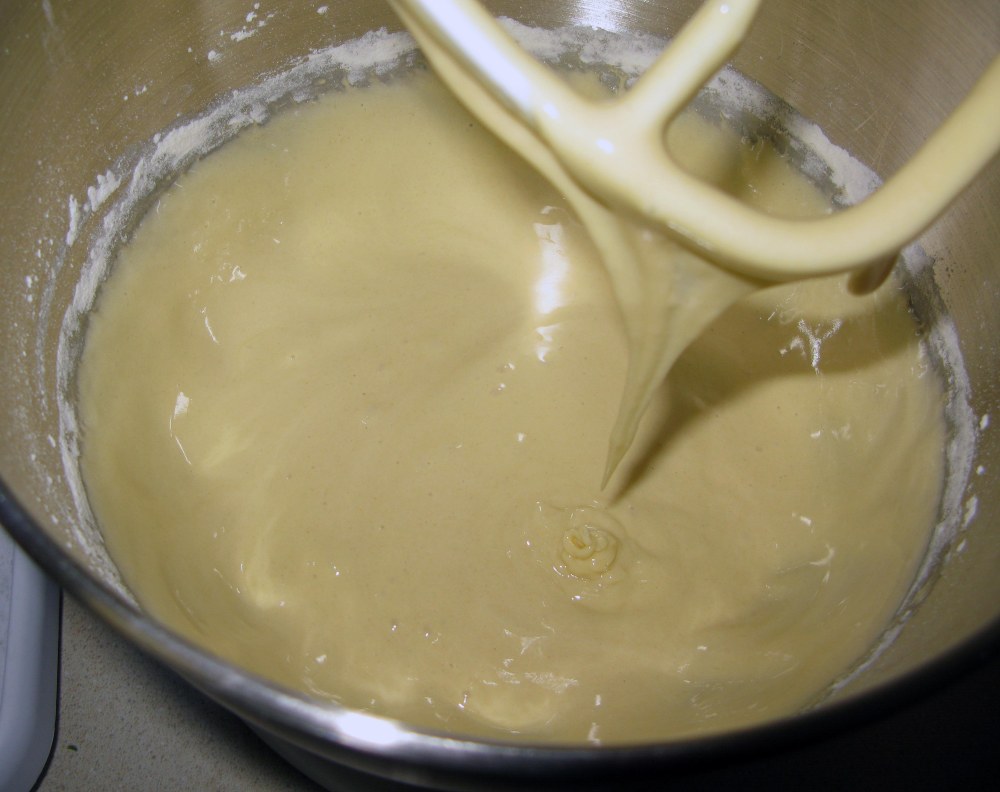 Add in the softened butter and beat on medium speed for 5 minutes.  The batter should be thick and smooth.

Add in the lime zest, juice, and ginger paste and beat the batter on medium speed for another 2 minutes.

Finally, add the baking soda and beat for 1 minute on medium.  Immediately pour the batter into the prepared loaf pan, carefully smoothing the top with a spatula.  DO NOT drop the pan on the counter to release the air bubbles like you would for a regular layer cake.  In this case, the air bubbles are necessary to help the cake rise.

Bake the cake for 45-60 minutes, until the top is cracked and golden brown and the cake springs back when pressed.  A toothpick inserted in the center should come out clean. 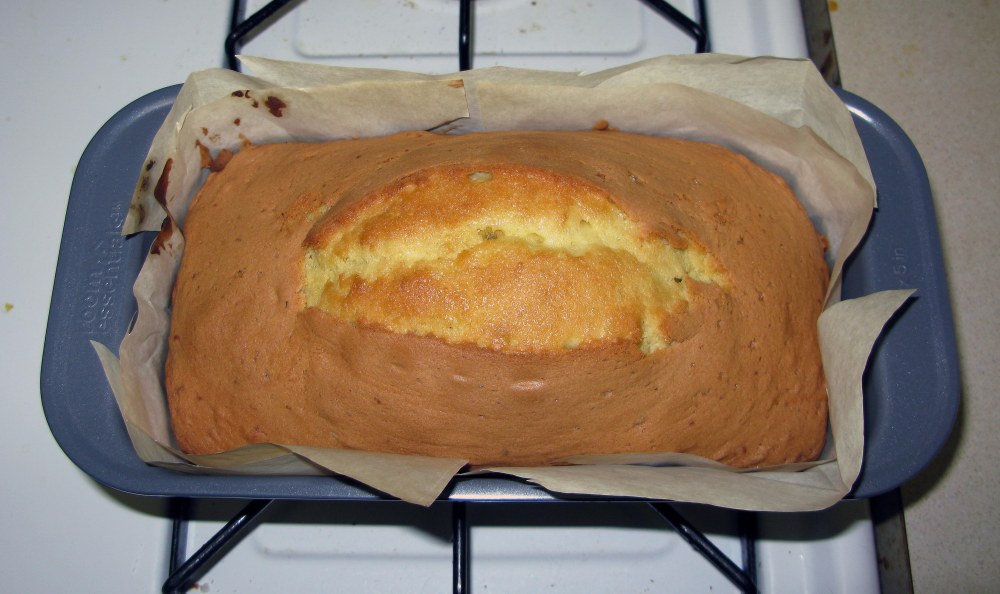 Leave the cake to cool in the loaf pan for an hour, then remove it from the pan and discard the parchment paper.