Cinnamon pie is something I’ve been tinkering with ever since I saw this episode of Psych for the first time (as an aside, why aren’t cinnamon festivals more of a thing?!).  As it turns out, cinnamon pie sounds easier to come up with than it is.  In my mind, it should have a consistency similar to pumpkin pie, but shouldn’t have any flavors other than cinnamon.  My first attempt years ago came out as a soupy mess.  My most recent attempt (prior to this one) came out more like a cinnamon quiche, which is not something I’d recommend.  This time, I finally got the texture (and, of course, the flavor) right.

This tart is based on the same recipe from Joy of Cooking as my pomegranate lime tart.  The key here is to use only egg yolks, and a lot of them.  My previous recipe used whole eggs, and it was most likely the whites that created the quiche-like consistency which was so disgusting.  Egg yolks make for a much silkier texture.  Milk infused with chai also helped to carry the cinnamon flavor through the tart.  If you don’t want to use milk, you could use strong tea instead.  If you feel like experimenting, you could choose a different flavor of tea to change the flavor a bit.

I would have liked to make this a full-sized pie, but that most likely would have involved adding half the ingredients, which means a dozen egg yolks, and I just couldn’t justify blowing a whole carton of eggs on one pie.  If you’re feeling game, or really want to show off at a holiday celebration, try it and let me know how it goes! 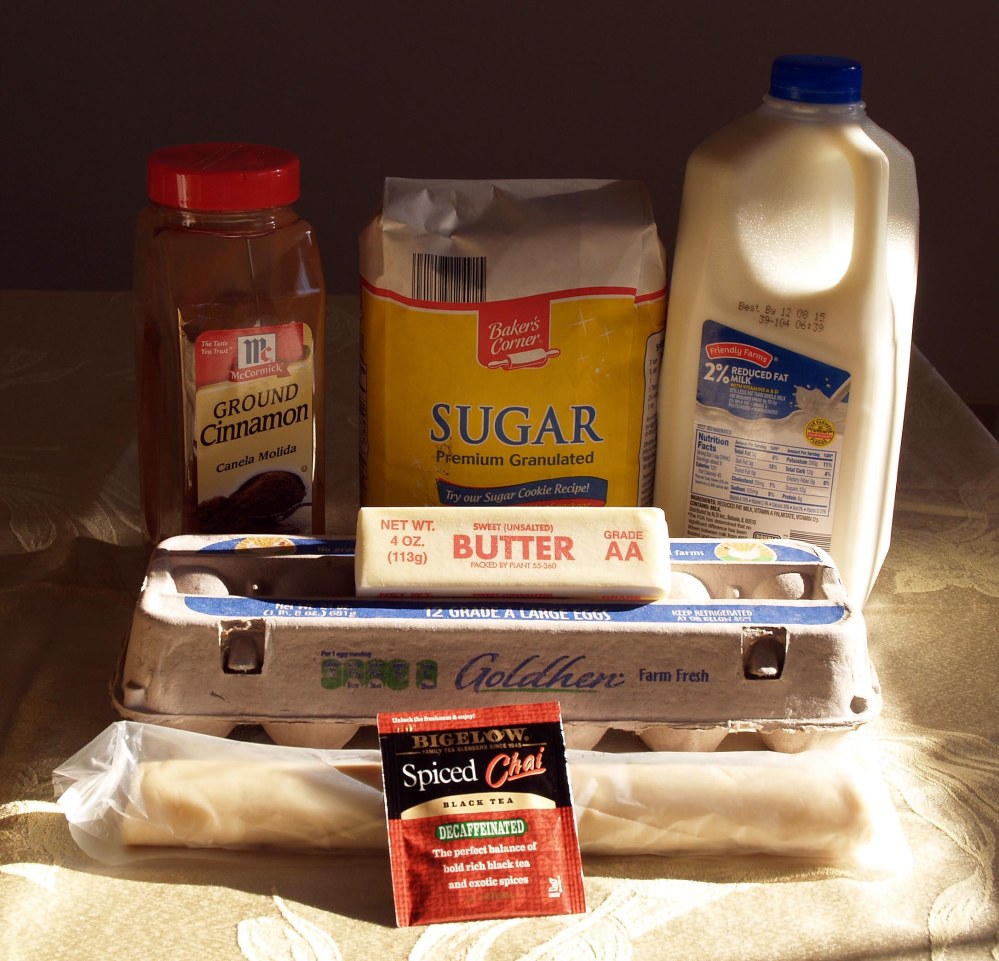 For the cinnamon whipped cream: 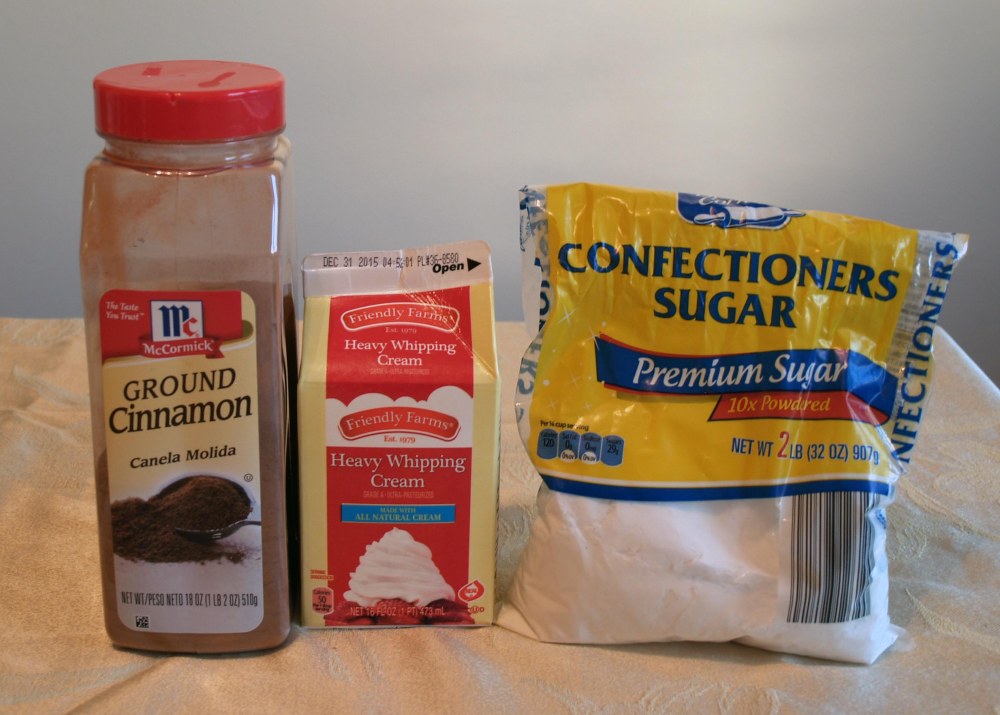 Prepare and refrigerate your pie crust if you’re making it from scratch (see here for the recipe I use).  I do confess that this time, after two failed attempts at making my own cinnamon-spiced crust, I just caved and used a store-bought crust.  It was still delicious.

When you’re ready to roll, preheat your oven to 425°F.

Roll out your pie crust and fit it into a greased and floured 9″ tart pan, trimming the crust flush with the edge of the pan.  Prick the bottom all over with the tines of a fork.  DO NOT patch the crust if it tears.  This will give your custard an opening to leak out of, which just leads to heartbreak.  If your oven is still preheating after you fit the crust into the pan, put the crust in the fridge until you’re ready to bake it. 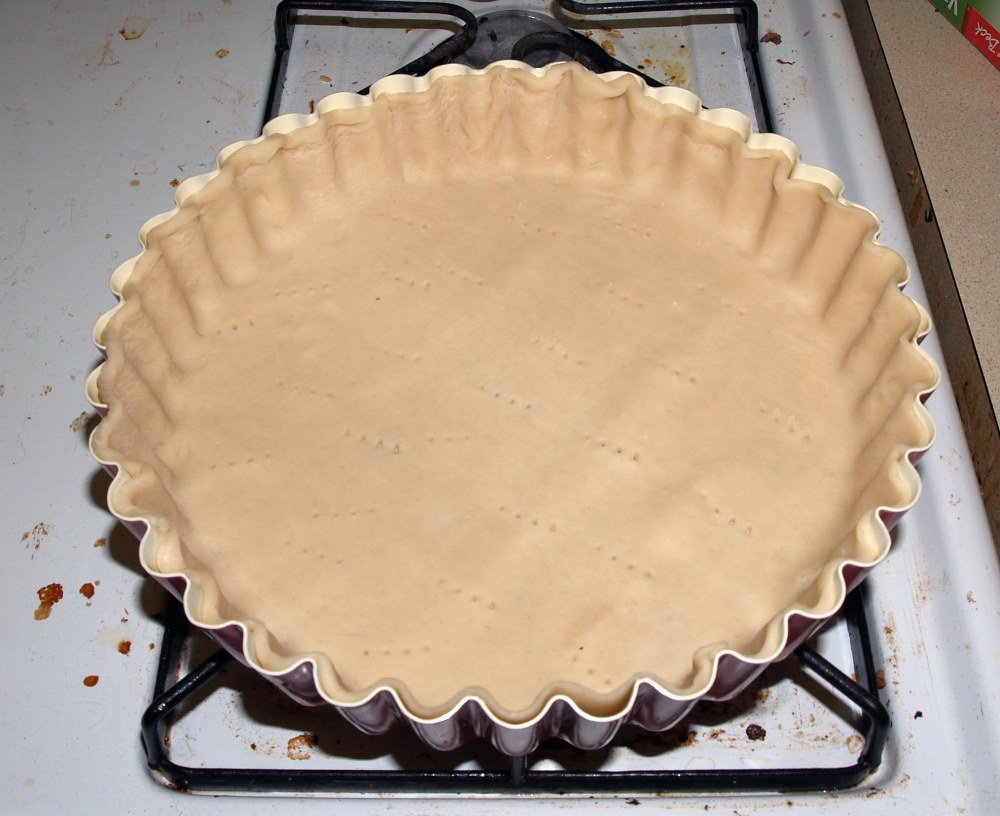 Line the crust with aluminum foil, then fill the foil with dry beans or a 9″ cake pan. 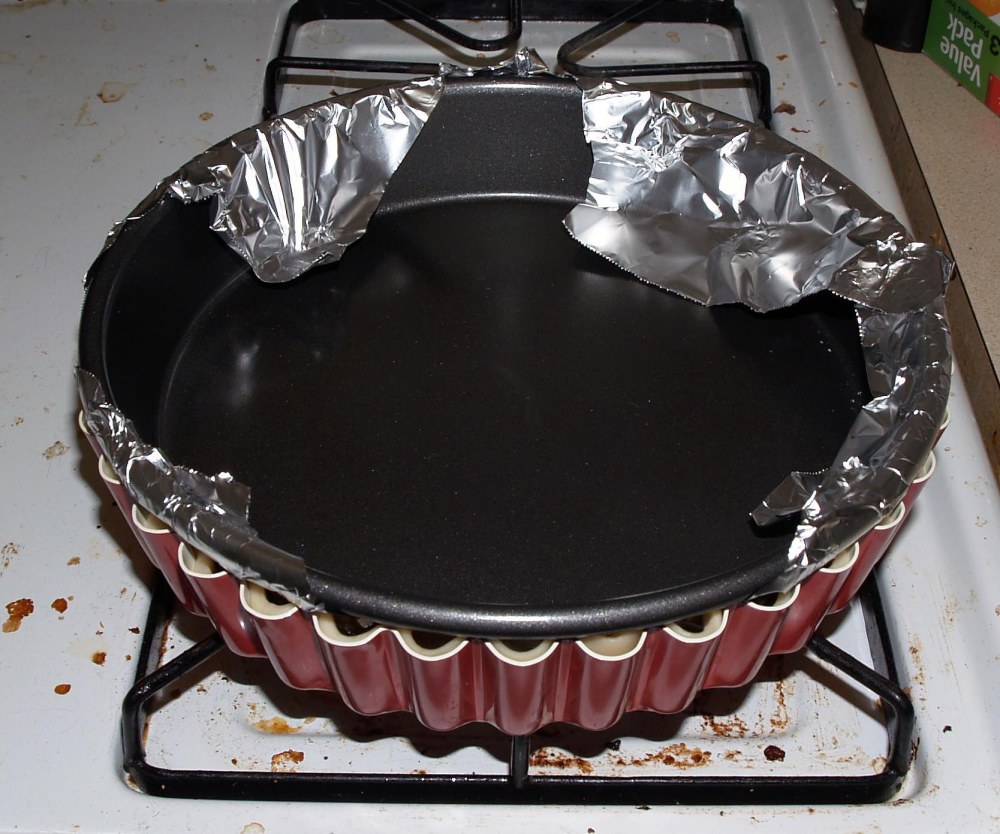 Bake the crust for 15 minutes.  Remove the cake pan/beans and aluminum foil and bake for another 5 minutes, until the crust becomes lightly browned. 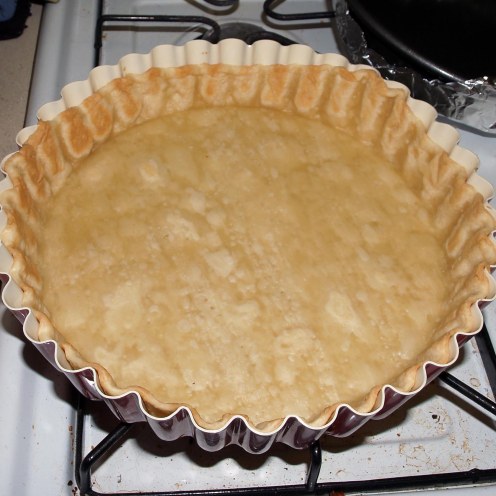 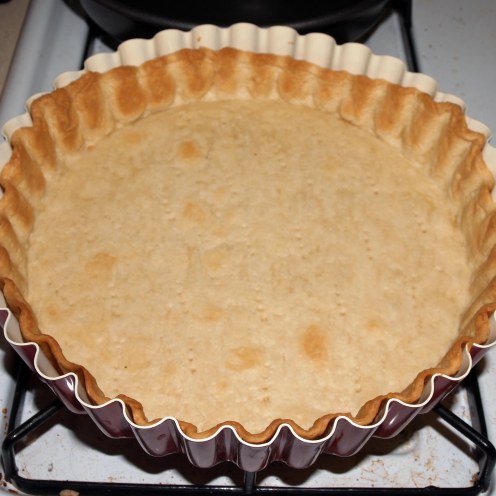 Reduce the oven temperature to 350°F.  While the crust is baking, combine the milk and the teabag in a small saucepan and bring the milk just to a simmer.  Remove from the heat and leave the teabag to steep for 5 minutes. 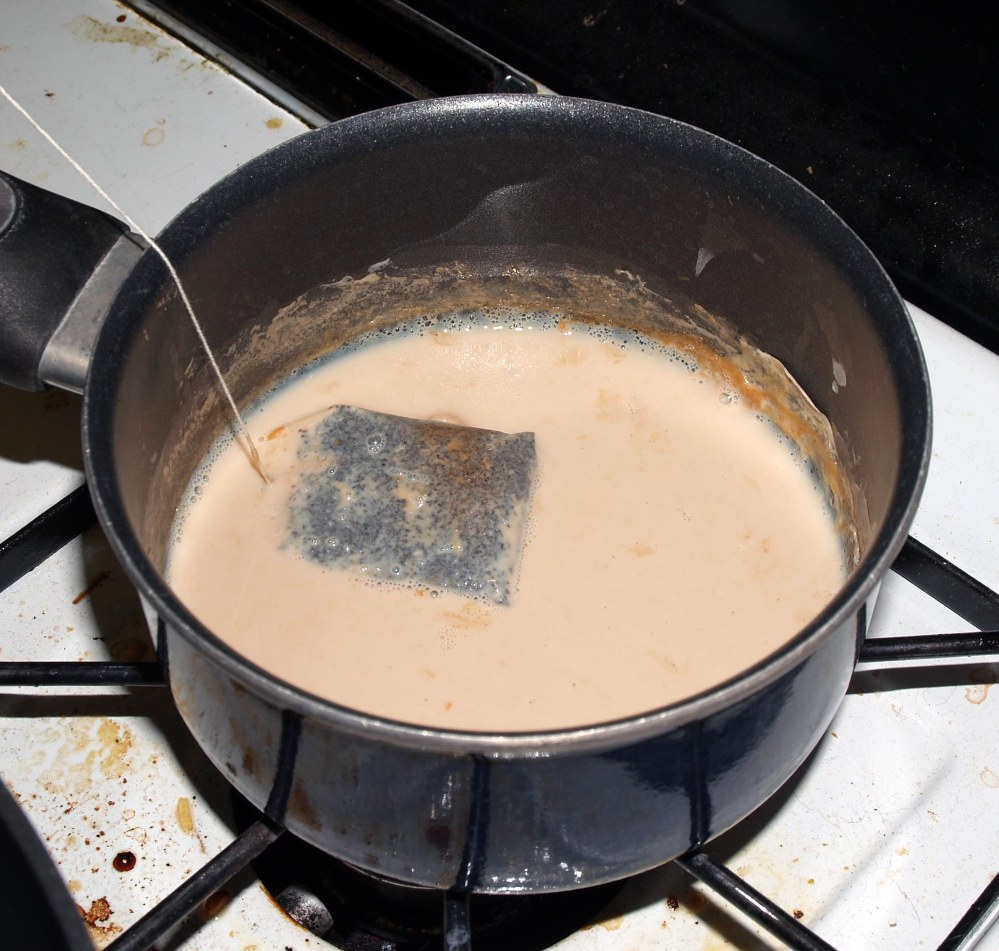 Remove the teabag, straining it to hang onto as much of the flavor as possible.  Set the milk aside.

Next, fill a large frying pan with 1″ of water and bring it just to a simmer.  In a medium, heat-proof bowl (like one of these), mix together the butter cubes and sugar.  Carefully place the bowl into the simmering water. 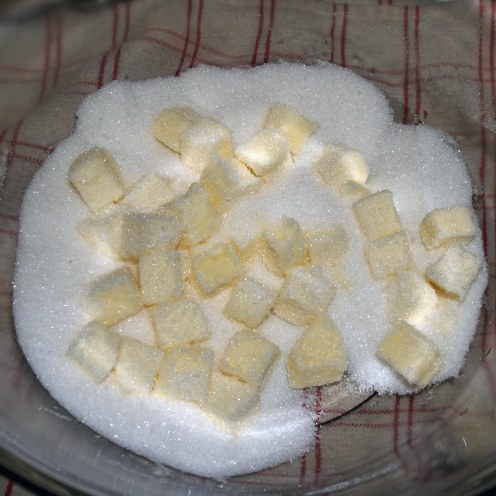 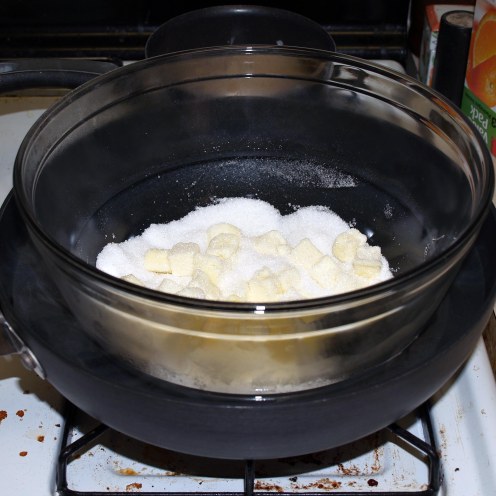 Stir the butter and sugar until the butter is completely melted.  Remove the bowl from the water.

Whisk in the egg yolks. 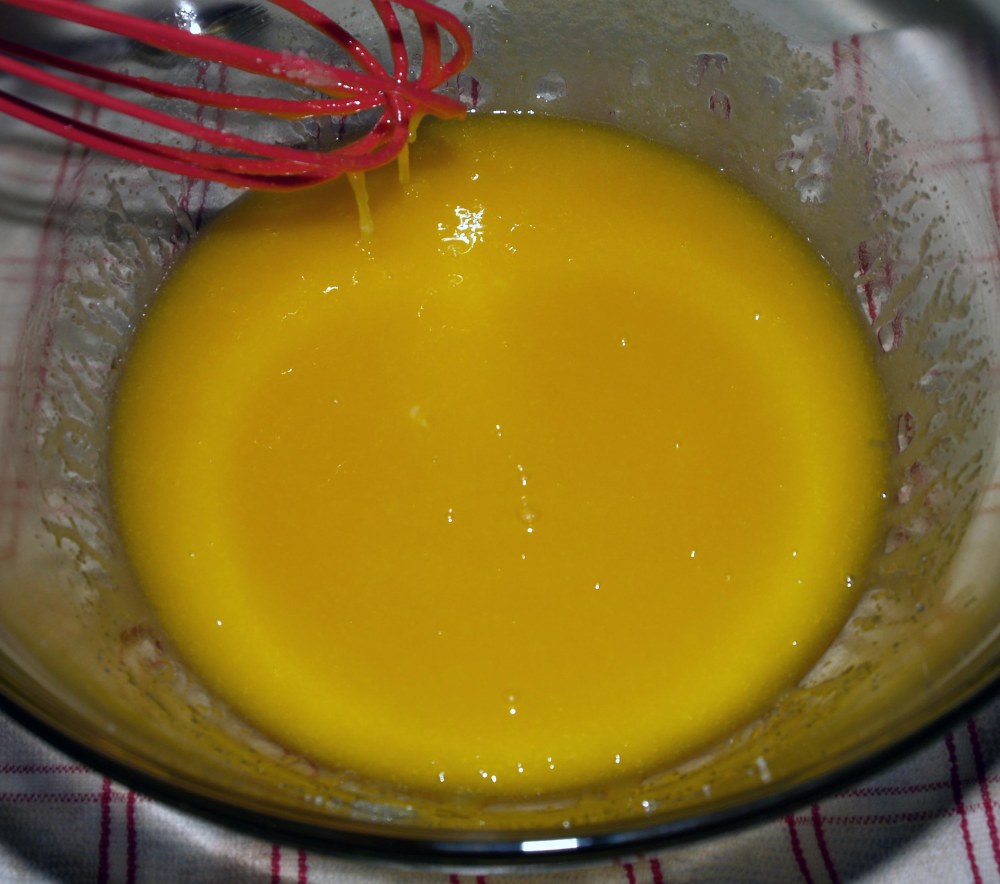 Next, whisk in the infused milk. 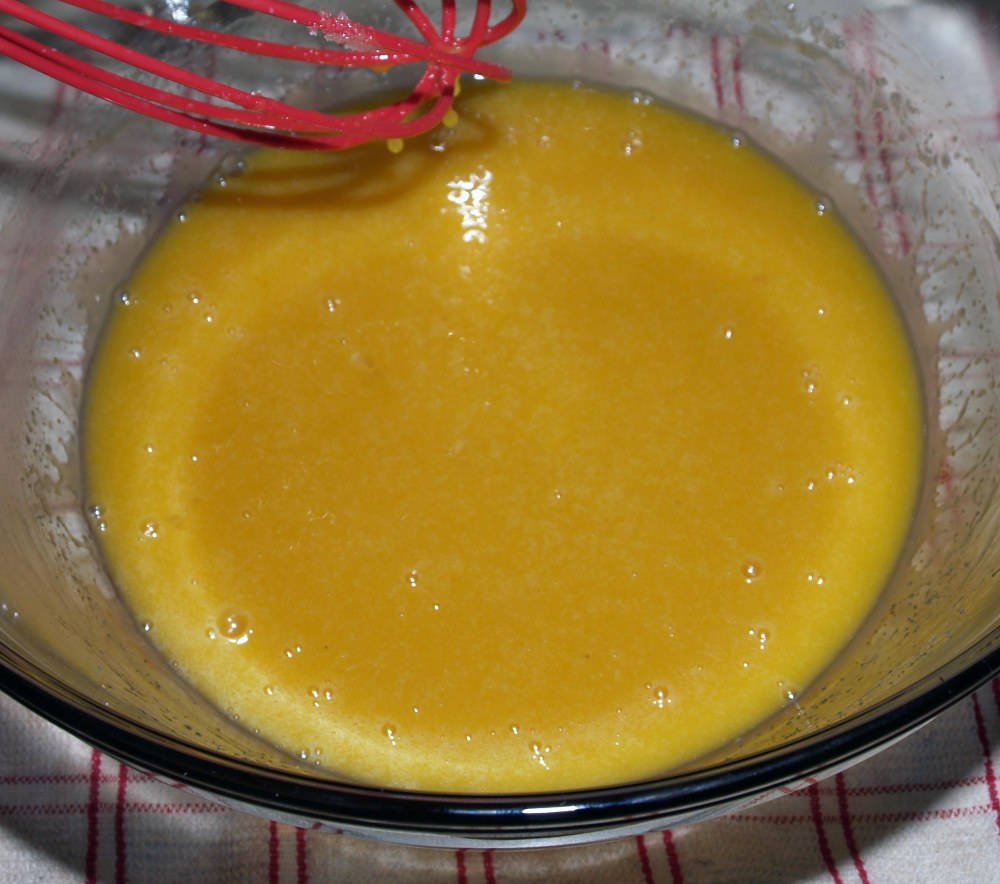 Return the bowl to the simmering water and whisk the custard fairly constantly until it thickens to the consistency of heavy cream.  The custard should stick to the edge of the bowl when you swirl it.  When you’re happy with the consistency, remove the bowl from the water for good. 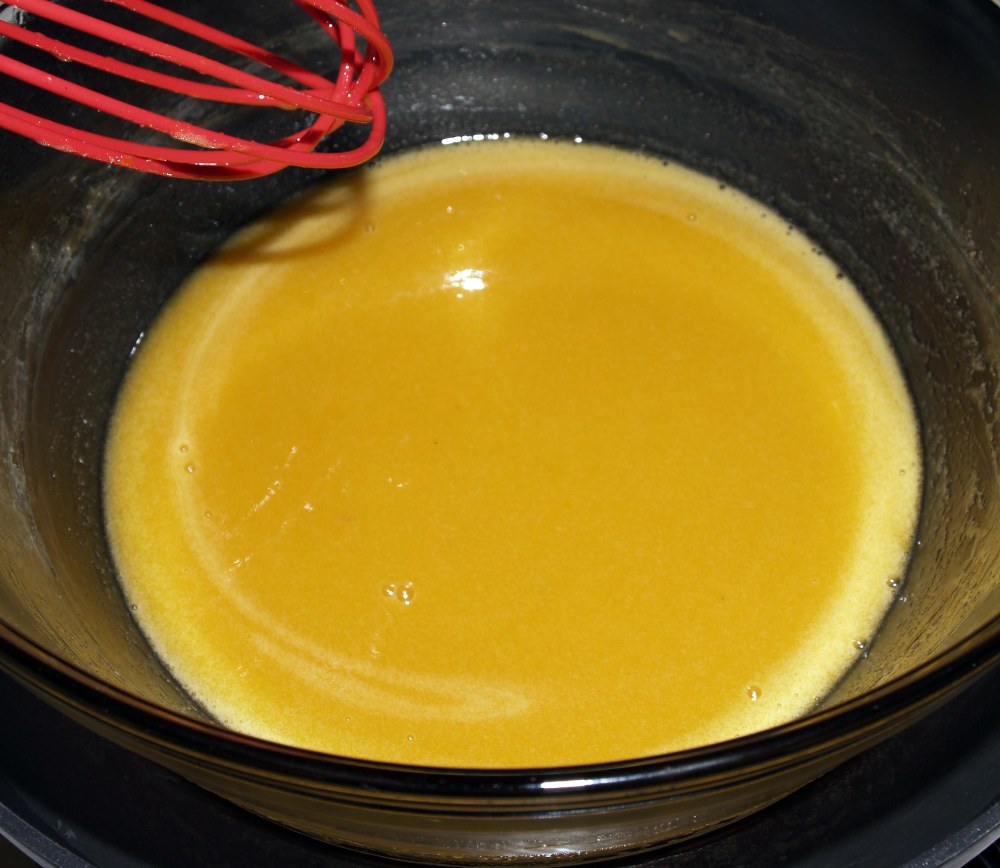 Finally, whisk in the cinnamon until no clumps remain and the color is consistent throughout the liquid. 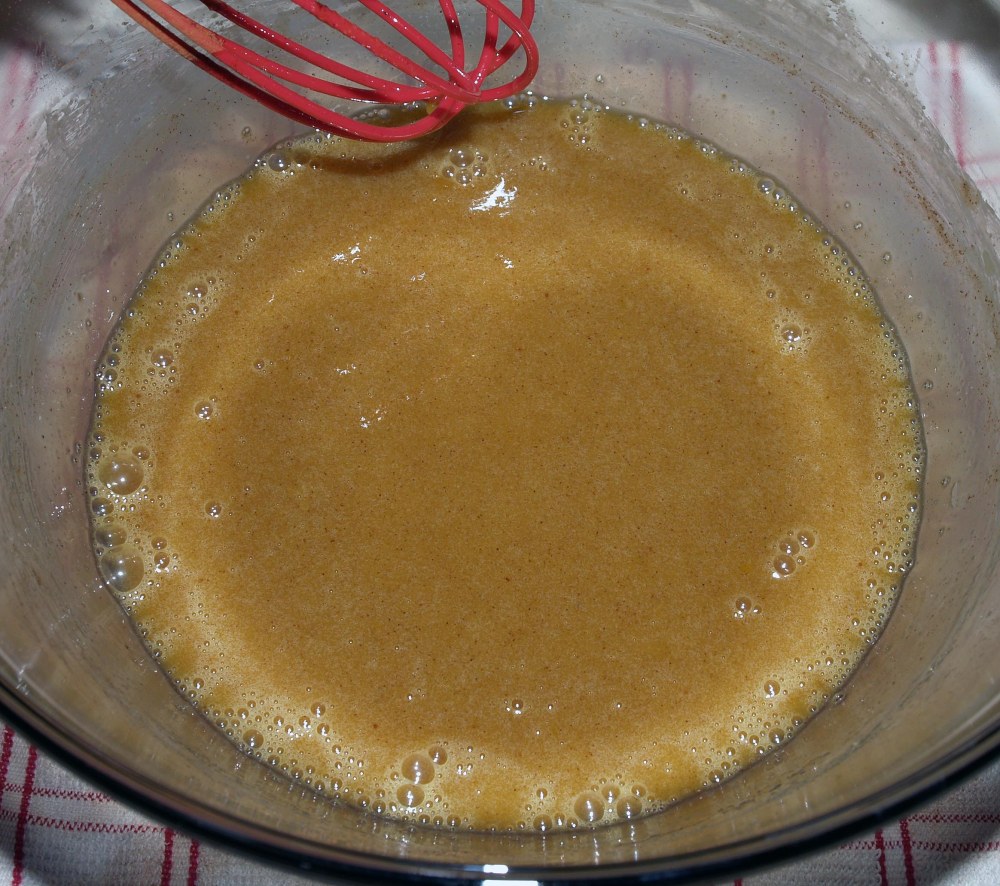 Pour the hot filling into the pre-baked crust and carefully transfer to the oven (I suggest putting the tart pan on a cookie sheet or pizza pan to prevent any leakage). 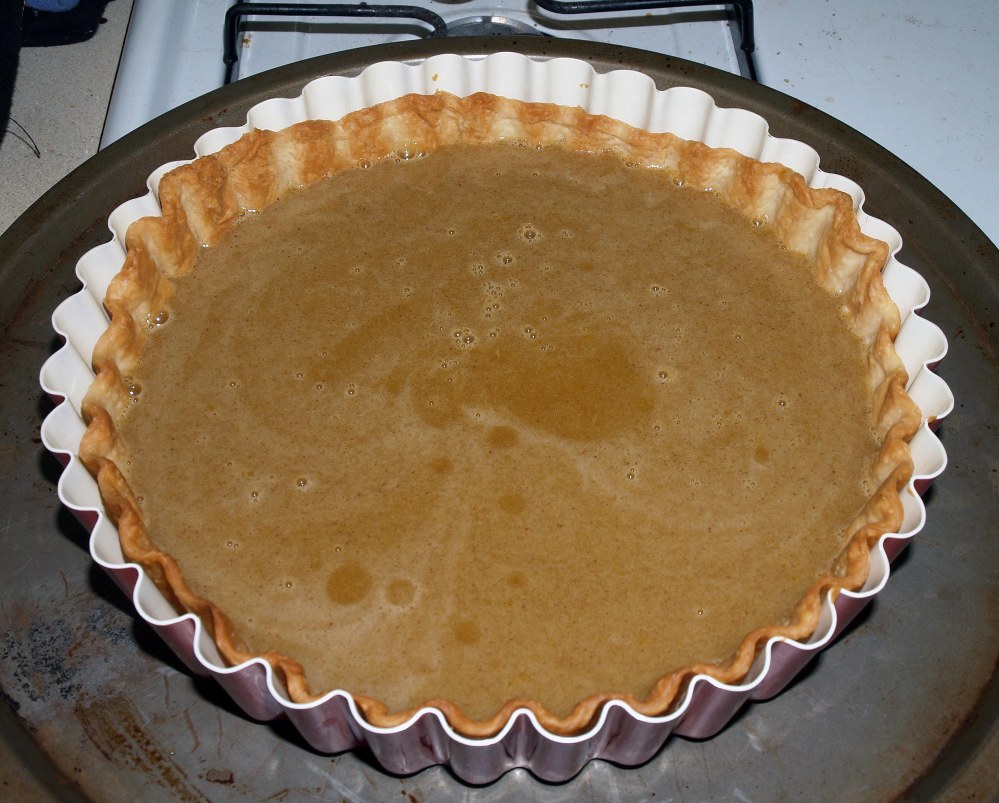 Bake the tart for 15-20 minutes, or until the center of the filling is set (it shouldn’t jiggle when you shake it). 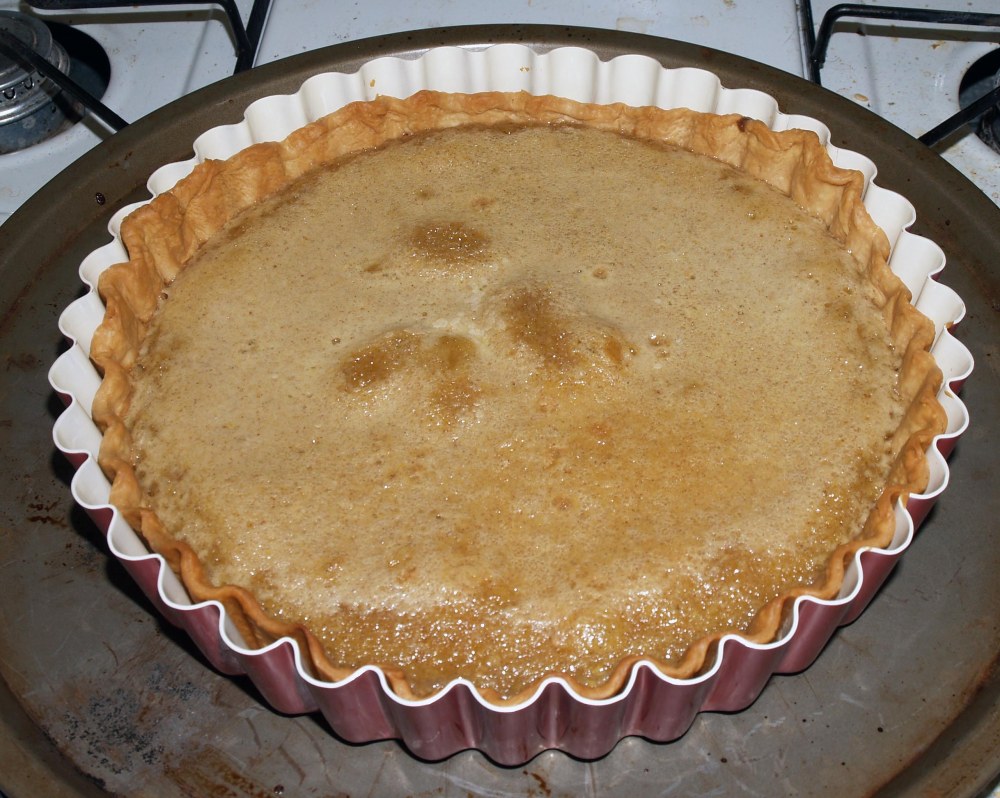 Now, as much as you might want to eat it right away, set it aside and let it cool completely.  I mean it, you will regret it if you cut this now.

When the tart is absolutely, completely cooled, carefully remove the edge of the pan.  If you are feeling brave (and confident in the job you did greasing and flouring the pan), you can run a thin spatula under the bottom of the crust to release it from the bottom of the pan and carefully transfer the tart to a serving dish (I was not this brave).

If you want to make the top pretty (and add even more cinnamon), you can decorate this with some cinnamon whipped cream, which is super easy to make.  Refrigerate a mixing bowl and the beater(s) of an electric mixer for at least 15 minutes.  When they are nice and cold, pour the heavy cream into the bowl and beat it on medium speed until it begins to hold its shape. 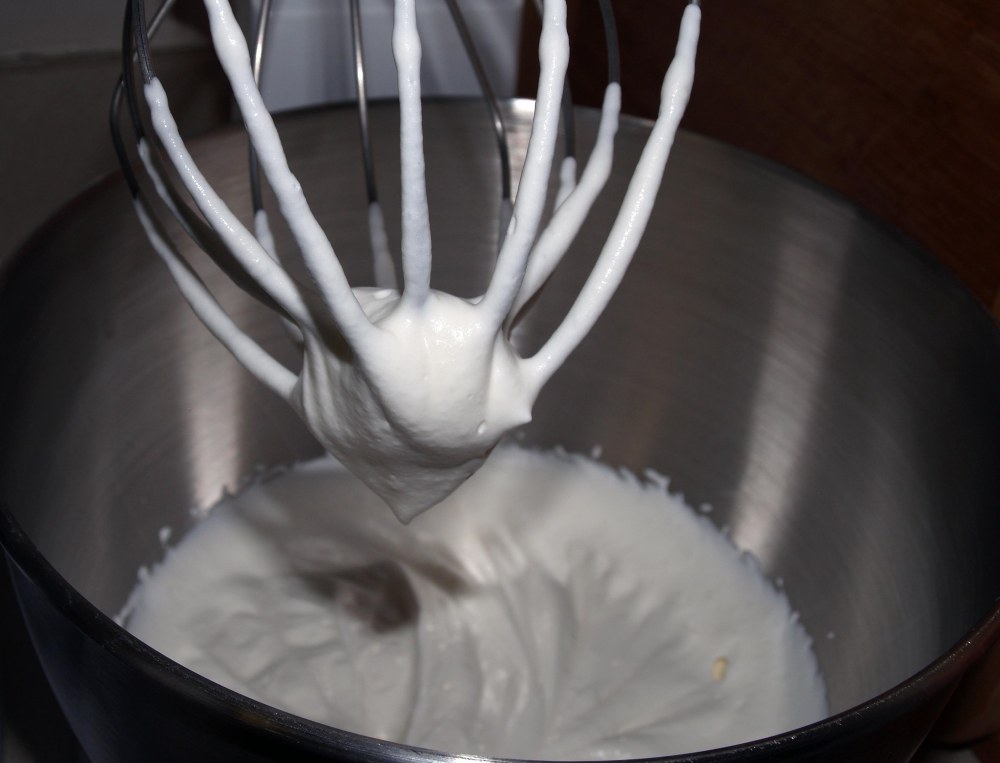 While the mixer is running on the lowest speed, add in the powdered sugar and cinnamon.  Scrape the sides and bottom of the bowl if necessary.  Increase the speed to high and beat the cream until it holds its shape well and stands in stiff peaks when you remove the beater. 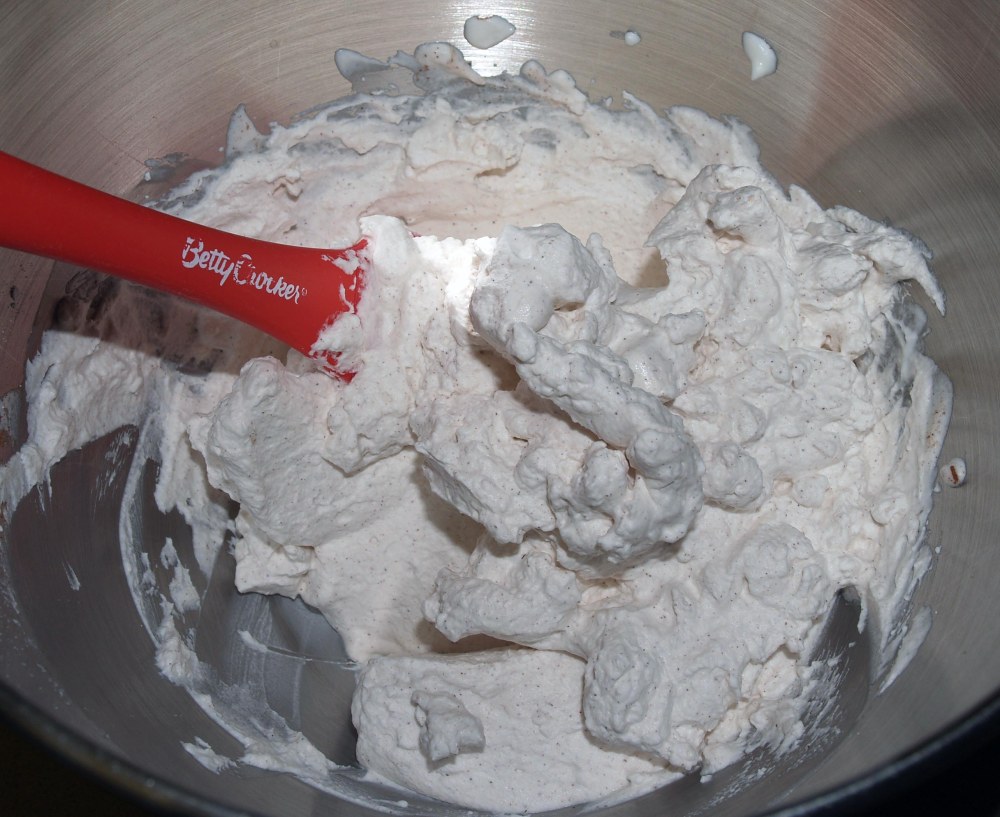 This was probably a little over-beaten…

Scoop the cream into a decorating bag fitted with a star tip and pipe it onto the tart, or just spread it on with a spatula (or eat it with a spoon, I won’t judge). 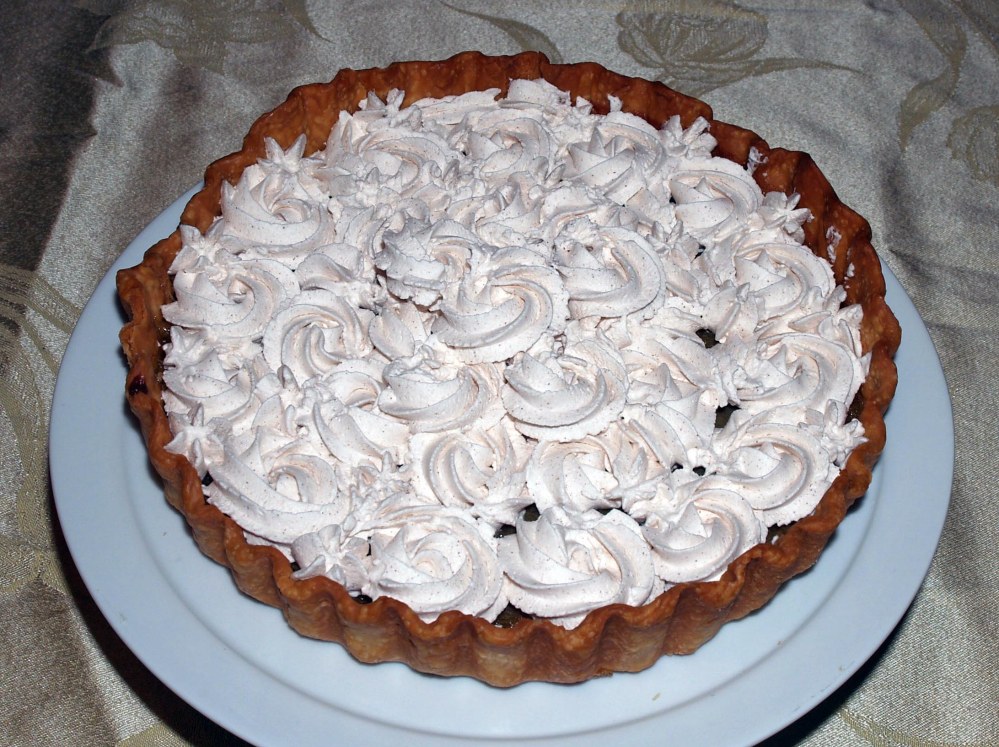 Serve immediately, or refrigerate for up to two days.

You can download the printable PDF recipe here: Cinnamon Tart